At SNAD, they have a library of over 2,000 volumes. The books range in subject from needlework techniques to history to fashion. We would like to start highlighting books from our collection and for our first #SNADLibraryHighlight we have chosen the classic, “Decorative Needlework” by May Morris. May Morris, daughter of artist and designer, William Morris, was an important and influential artist of her time and continues to influence stitchers today.

The copy we have in our collection is #39 in the “Edition de Luxe,” consisting of 125 copies only. It was printed in 1893 by W. P. Griffith & Sons in London. Her book contains embroidery stitch diagrams, chapters on “Design, Convention, and Realism”, “Contrast and Repetition”, “Lines and Curves”, as well as an opinionated account of colors!

Some highlights from the color section:

“For a central yellow choose a clear, full colour that is neither sickly and greenish nor inclined to red and hot in tone. Of impure yellows, pale orange and a warm pinkish shade that inclines to copper are useful, besides the buff and brownish shades that will sometimes be wanted for special purposes. These, I think, include all the yellow shades that you need to trouble about.” (p. 112)

“Red and green must be carefully chosen, and softened by an outline; avoid much use of any cold green, especially avoid placing it against a misty blue, for the indecision and muddled effect of this arrangement is the reverse of pleasant.” (p. 119)

Our library is free and open to the public to browse. We are open Mon-Sat 9:30-4:30. Come and get inspired by our fabulous collection of books!

Egyptian samplers from the 10th-16th centuries. 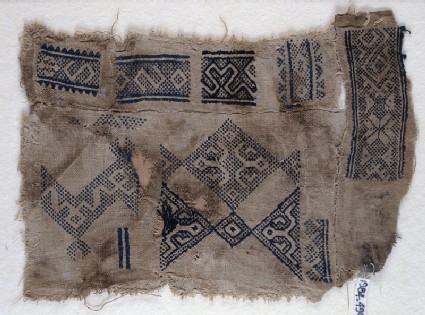 This is a free Open Library book. There are 200 (!) pages of embroidery stitches in here! From the every day back stitch to the incredibly exotic cretan stitch this book has everything! 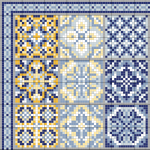 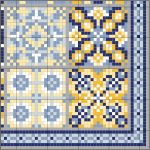 This is a link to a Pinterest board.  It has pictures of Spanish/Mexican Samplers.

Here aare a few that have caught my eye in terms of format and style. 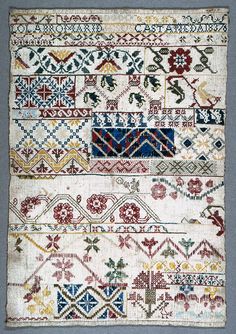 Impact charms primarily due to their protective properties and colors of the spectrum of the human aura.

So, putting on his clothes with embroidery oberezhnoy or amulet in the form of jewelry matching color, you get the ability to quickly patch a power breakdown in one or another part of the aura, which can be dangerous to your health and life.
With regard to the manufacture of certain rules charms – they are.
There is a misconception that the supposedly wards can not do for themselves. In fact it is not. It is known that amulets to protect themselves did our ancestors and used them to protect themselves, their family and the home, as evidenced by numerous archaeological finds. Everything points to the fact that our ancestors believed in its own strength and prepared themselves for themselves and family charms.

The symbolism of embroidery patterns in oberezhnoy

•   Crosses – Reflections of Evil, barrier protection.
•   Circles – a symbol of fertility, motherhood, fertility symbol of the feminine in nature.
•   Squares – a sign of fertility, virility and power, a symbol of masculinity in nature. Often intertwined dark and light squares, sometimes enhanced shading inside and out.
•   Spiral – a symbol of wisdom, of eternity. Protection against any environmental and physical threats. If you sew it to the blue-violet tones, spiral will be a symbol of secret knowledge and the discovery of secrets. Abhor powerful symbol for all “dark” entities Toneva world, if the color is red, white or black. Often spiral becomes a symbol of the snake.
•   The wavy line – a symbol of water, waves, beginning of life and end of life, the ability to adapt to circumstances, a symbol of eternity and changes often used in embroidery on things for the dead and ritual towels, like sending them down the river of life in the valley of death, an easy way, without obstacles.
•   Triangle – a symbol of human communication, fertile land forces, marriage, security, protection.
•   Stars with smooth rays – a sign of intelligence, willpower, sincerity, loyalty and pure thoughts. Stars with curved beams – the ability to avoid danger, luck, assistance in acquiring knowledge .
Floral motifs
Floral ornament – a symbol of fertility, abundance, prosperity.

•   Spikes – a symbol of fertility, protection from witchcraft, enjoys in amulets for home and child protection.
•   Wood (usually herringbone) – a symbol of long life. Played pol location of branches: branches down or up. Down branches – longevity, healing, relationship with the world and eternity. Up branches – aggression, defense, attack, parry readiness, discipline and focus.

•   lily – a symbol of purity and innocence. Her image can be often seen on children’s embroidered towels.

•  Bird – one of the most common and favorite images of folk art, in particular oberegovoy embroidery. In general, images of birds are found on the ends of the towel that had ritual significance, and especially weddings. The bird was considered in antiquity messenger of the sun , the mediator between heaven and earth (Rybakov BA Russian applied art X-XIII centuries. L., 1971). She was also endowed with functions of warding health of the woman and her children [11].
•  Dove – symbol of purity, holiness, was considered divine bird.
•  Swallow – the messenger of good, happiness, spring, home comfort. Like the dove that belongs to esteemed pure, holy birds.
•  Nightingale and cuckoo – Many beliefs about cuckoo intertwined with beliefs about the nightingale: legends they often act like brother and sister, and in some song lyrics – as a married couple or the bride and groom. These birds are often embroidered on a branch of viburnum.
•  Rooster   – a symbol of the sacred bird, the male principle. As the sun bird, rooster was considered sacred since ancient times. Ancient interpretation of the image of the cock as a symbol of masculinity is reflected in the embroidery on the wedding towels. With a cock and associated symbols of resurrection and eternal rebirth of life. The symbolic significance of the opposition has roosters color: bright red rooster associated with the sun, with fire; Black – water, underground kingdom and symbolizes death, evil [5].
•  Duck and chicken – at home and peace symbols, used in the protective pattern for household goods (towels, tablecloths, and so on. n.), protect against jealousy and quarreling, symbols of fertility and motherhood. In a wedding dress duck personified the bride and groom, embroidered with squares and ears – long symbolized the desire of family life, wealth and fertility.
• The Swan – a symbol of love, is often used in embroidery oberezhnoy related to the wedding rites.
• Peacock – a symbol of abundance, fertility, immortality, also considered a symbol of wisdom, because of the many “eyes” on the tail. Pava – a symbol of family happiness.
• Raven – a symbol of wisdom and eternity, helps in gaining knowledge. Used in amulets for protection from physical danger.
• Butterfly – a symbol of the human soul. In the ancient art Psyche depicted as a butterfly. The Greek word “Psyche” means “soul” and “butterfly”.
• Horse – protects from the dangers of the road, cursing and envy. One of the most popular motifs in Russian oberezhnoy embroidery. Usually depicted in embroidery towels domestic plot.

•  Bull – used in amulets for monetary success in trading. Symbol of fertility and birth rates.

Central among these are the images of the Great Goddess – Mother Earth, also called Makosh, Keeper.

Pattern Mother Earth embroidered on the towel when a breadwinner taken to the war, he returned to safe and sound. [2]
When the image of a woman with raised embroidered with his hands, it meant the goddess Makosh, with downcast – Lada (usually depicted with deer on the sides).
•  Angels – a symbol of the person and the home. It was believed that they brought into the house of happiness and good luck.

♦  the sun – a symbol of protection and healing, used in embroidery woolen threads to restore strength and energy;

♦  moon (crescent ) – a symbol of power and victory, protection from witchcraft, embroidered woolen threads to protect and gaining secret knowledge.

Equally important was the color of the thread, which was embroidered amulet. In most cases, performed oberezhnaya embroidery threads of various shades of red: red, scarlet, cherry, poppy and others. The red color with various shades of it symbolized by birth and vitality. Oberezhnuyu embroidery on baby clothes embroidered in red only. As children get older, used a variety of colors, as it was believed that he had his own power.
Skylark – a symbol of the messenger of spring. Embroidered on their shirts and gave her lover. It was believed that the bird sings about love.
Other colors also have a symbolic value in oberezhnoy embroidery.
•   White – purity, light, spirituality, sacred.
•   Green – flora, wealth, fertility, birth, life.
•   Black color – the land, protection from infertility, while the death, the end of life;
•   Gold color  – the sun.
•   Blue – sky, water, protection from natural disasters.
Some rules embroidery amulets
Begin embroidering talisman should be in a calm, peaceful state.
Embroidering, think about your wish. Embroidery should be clean and tidy on both sides, and wrong side without knots. Nodes terminated energetic connection with her ​​embroidery carrier impede the smooth flow of energy.

It should not be on one thing embroider several different purposes oberezhnyh patterns.From the book of Margarita Shevchenko “Talismans and amulets with their hands” http://www.rukomeslo.ru/

site with lots of workshops in different kinds of crafts and a large library of books on needleworkhttp://narjad.narod.ru/        http://sarafany.narod.ru